GitHub Actions is an automation platform that you run directly from inside a GitHub repository.

Using GitHub Actions, you build workflows that are triggered by any kind of event. These workflows run arbitrary code as Jobs and you can piece together multiple Steps to achieve pretty much whatever you want.

Aside from automatically posting GIFs on every pull request, the most obvious use-case for this new platform is to build a testing CI/CD pipeline. 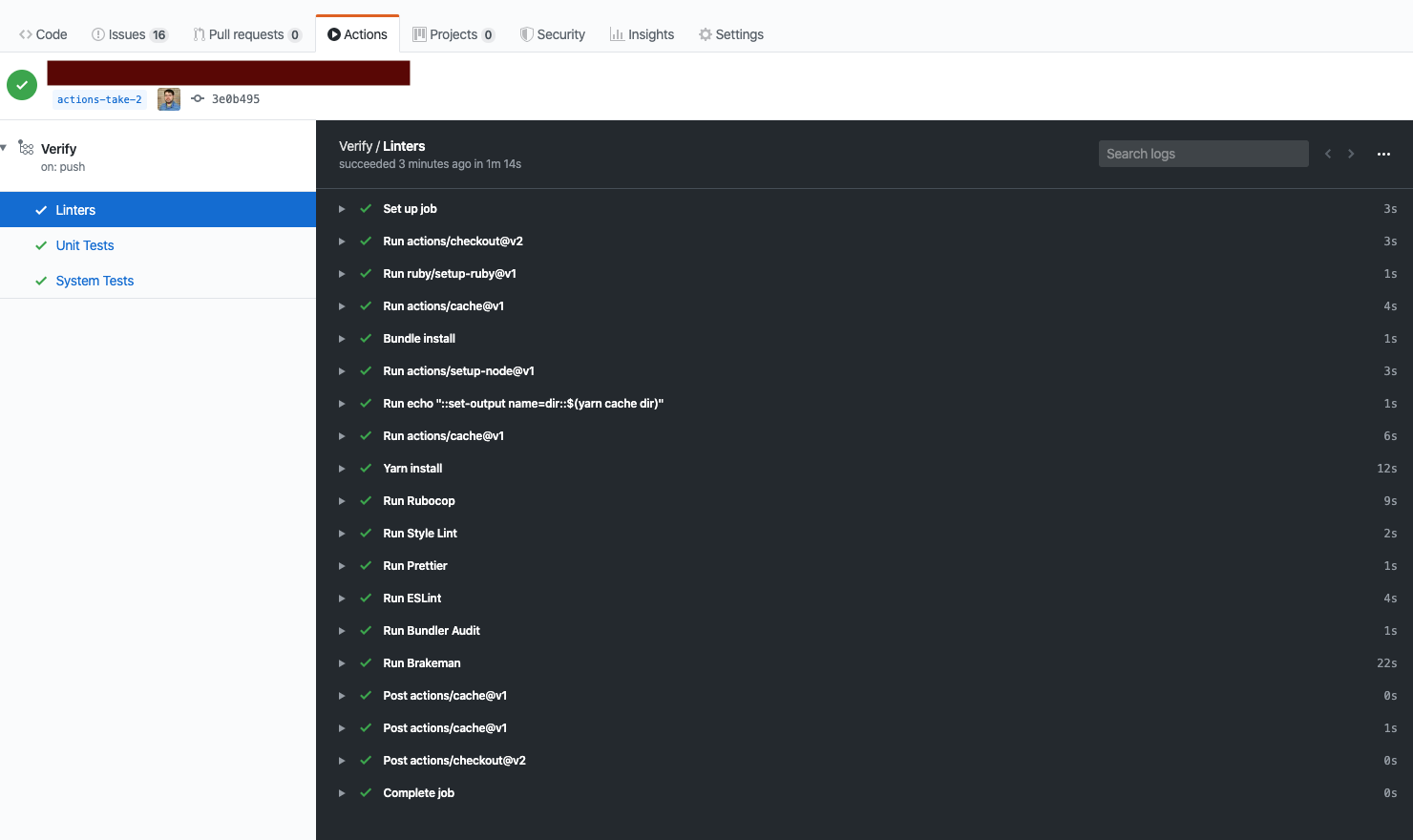 Good question. All of these CI/CD platforms are, more or less, equivalent.

Dedicated CI services like CircleCI are battle-tested for the use-case of running linters, executing tests, reporting results, and kicking off deploys. GitHub Actions is more akin to LEGO – it is a generic platform for running arbitrary workflows and automation.

On the other hand, GitHub Actions come included in your GitHub projects. For public repositories, GitHub Actions are free (without limitations as of this writing). For private repositories, you get 2000 free build minutes per month per repository – and if you have an existing GitHub company plan, you’re getting upwards of 10k build minutes included at no extra cost. (Full billing/usage limits here)

All of the competing platforms have free tiers and, really, the biggest benefit to a project is to have ANY kind of CI/CD tooling set up. The differences between vendors are pretty minor.

I’m trying to keep my Rails applications as boring as possible. There is enough complexity in building products and solving customer problems that I don’t need to create more work for myself and my team with an exotic ops setup.

I also work at a custom software consultancy: I help other companies ship products and tools so it is appealing to have one less external service to juggle.

Setting up CircleCI isn’t hard, but it’s one more account to register, one more place to put a corporate credit card, one more thing that my customer might ask “hey, what is that for again?”.

Additionally, I like that we can keep our CI pipeline close to the code. One of the biggest benefits in the current wave of CI/CD tooling is the shift to Infrastructure-as-Code: you configure your build using a flat file and commit that with your project. This is miles better than fumbling around a poorly maintained Jenkins instance and changes to your pipeline can be reviewed and merged like the rest of the codebase.

GitHub Actions pushes this to the extreme. Now you have one single spot for a project’s source code, issue tracker, project management (GitHub Projects), code reviews, security alerts, and now: CI/CD testing. One account, one service, one place to look.

Migrating from CircleCI to GitHub Actions for a common Rails setup

If you’re like most people, you probably set up your CircleCI configuration on the first week of the project based on a thoughtbot blog post and haven’t touched it since. Me too.

But no worries, it is straight-forward to move from the CircleCI 2.0 configuration format to the GitHub Actions syntax.

Your configuration might be a little bit different, but conceptually a vanilla CI/CD pipeline for a Rails app:

Those steps run in order and if any of them fail, the build fails. You get a red

on your commit in GitHub, you can’t merge your PR, someone yells at you in Slack, you know the drill.

To get a build running on GitHub Actions, we simply translate those high-level actions into the matching workflow syntax.

One change I found useful to make was to take advantage of GitHub Actions allowing for parallel Jobs to run as part of a single workflow. This feature allows us to run linters and the tests as separate jobs that both must pass for the overall build to pass.

Most of the competitors do not offer much parallelization on the free/cheap tiers. While each job has to setup the basic environment, we can save a few minutes by running the final steps at the same time. (Note: this approach will use less minutes of wall clock time, but you will use more total build minutes).

I spent one evening setting up the workflow with the goal of getting it to feature parity with our existing CircleCI setup and I was able to achieve that.

That said, I am not a DevOps expert – I’m just trying to get a solid pipeline set up so I can focus on more important things.

GitHub Actions is a compelling option that is worthy of becoming the community default. It makes too much sense to have GitHub be the one-stop place for your repository, issue tracker, and build server. One less external service means less mental overheard and a more “boring” setup that lets us focus on shipping quickly and solving customer problems, not doing integration work.

If I was starting a new project, I would absolutely start using GitHub Actions as my default CI service.

This article has been updated: the original draft was written during the GitHub Actions beta period and many of the areas for improvement (namely caching) were fixed!

This article has been updated: switch to using built-in bundle cache options with the ruby/setup-ruby action

This article has been updated: switch to using built-in yarn cache options with the actions/setup-node step and bump various library versions